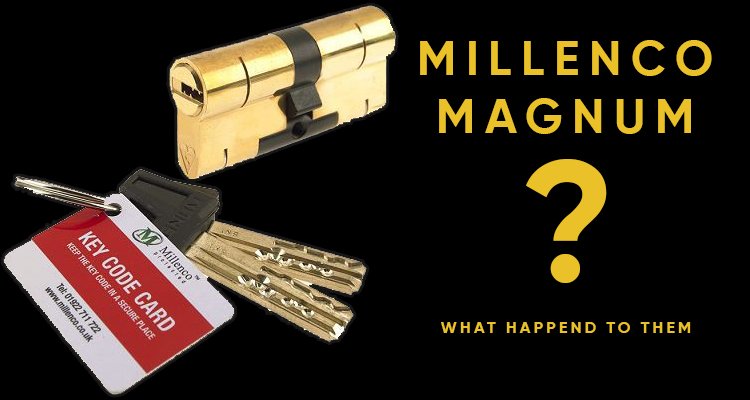 Where did Millenco Magnum go and what happend to them? Magnum have vanished and the locks are now branded as Yale Superior instead of the Millenco Magnum. I Wonder if there key code cards still work?.Lucky for London Locksmiths that the gearbox and mechanisms are still available.

Magnum made some really nice locks that i would of love to get my hands on in particular there half moon cylinders.

It would of been great if millenco still supplied these locks although now i suspect obtaining new keys would be pretty hard to come by.

All in all not a bad lock to have had in your door.

A little about these locks below:

Millenco Magnum has been Rebranded as Yale Superior Series (High Security Cylinder)
Anti-Bump: Magnam features ‘V-Pins’ on both ends to resist bumping.
Anti-Snap: The Cylinder was fixed into the lock through a steel tubular bar, significantly strenghening what is tradionally a weak poin around the fixing screw.
Anti-Drill: Magnum was protected against drilling by antidrill pins and balls on both ends.
Anti-Pick: Four special anti-pick pins on each end resist picking
Satcrificial break points for double extraction protection

Anti-bump V pins, four anti-pick pins, along with anti-drill pins and balls on both ends, meant that the same Magnum cylinder could be fitted to inward or outward opening doors, eliminating the need for the retailer or door manufacturer to double-stock offset sizes.

Each cylinder was supplied with a plastic key code card which the end user should keep. This was used to order pre-cut replacement keys from the cylinder supplier, as key blanks where not available on the High Street to increase key security.

All material appearing on The London Locksmith website ("content") is protected by copyright under U.K. Copyright laws and is the property of The London Locksmith. You may not copy, reproduce, distribute, publish, display, perform, modify, create derivative works, transmit, or in any way exploit any such content, nor may you distribute any part of this content over any network, including a local area network, sell or offer it for sale, or use such content to construct any kind of database. Getting your site blacklisted is not fun..